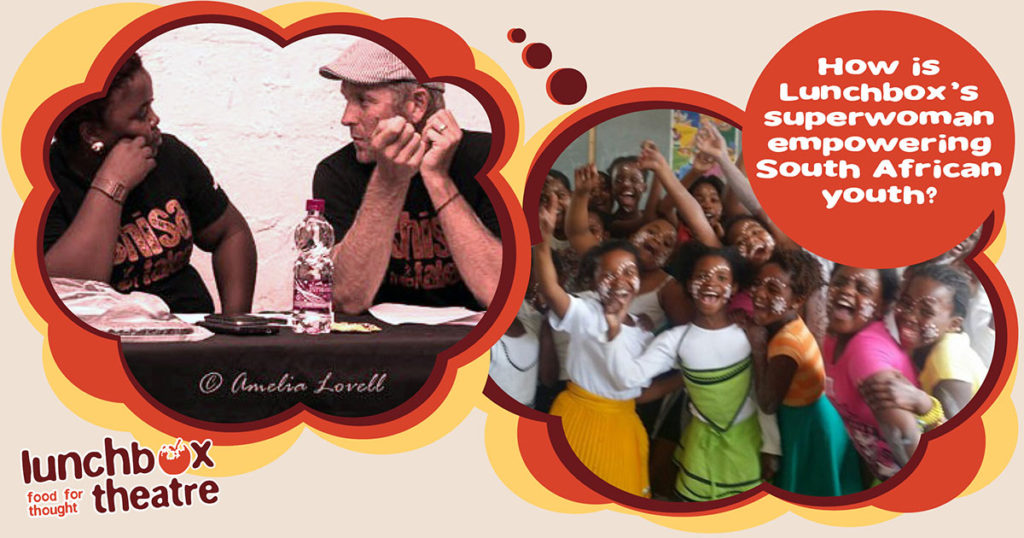 Where does Amanda Valela get her power?  Who is this young woman from a little township near Plettenberg Bay called Kwanokuthula, which means ‘Place of Silence’?  How has she broken the silence for so many as she passes on the skills of music, singing, and dancing? How did she manage to travel to so many places in her own country and then realize the dream of flying across the ocean in an airplane to a faraway, exotic place?  Not once, but a few times!

The simple answer is that Amanda never gives up on a dream and that attitude brings opportunities. It also helps when you are born into a supportive and talented family …

One of the best opportunities ever afforded her was when she joined Lunchbox Theatre in 2008. Before that, she won the second place in the Nederberg Competition in Knysna as a Dancer with the Masimanyane Theatre Group.  She went on to win the Cape Town Dance Competition!

She has delighted in performing in festivals like the National Dance Festival in Upington, the Ikhwezi Festival, at the Baxter Theatre in Cape Town, The KKNK festival in Oudtshoorn and the National Arts Festival in Grahamstown. However, the real wind beneath her wings has been her passion for teaching youngsters Kwaito, Traditional African, and Gumboot Dancing.  Destiny intervened when she took her dance group, AMAcc to Lunchbox’s Tshisa Talent Competition. As one talented person recognizing another, founder Stuart Palmer invited her to join Lunchbox Theatre as an actor, dancer and group facilitator.

By 2017 she and the team had performed nearly 600 shows which took her to all corners of the Eastern and South-Western Cape of South Africa. Her dream to travel in an airplane was granted when she was chosen to represent young, South African black, female Directors in the “Ideas to Action Program” followed by the” Inspiring a Generation Program” and attended the BIBUSE Festival in Sweden. Next was the HIFA Festival in Zimbabwe where she co-directed iLifa, The Inheritance. This was topped by a trip to Linz, Austria, to attend the SHARXPIR Festival as part of the”Next Generation Program”. This opportunity all came through Assitej via Lunchbox Theatre.

Could all this ‘good luck’ be a karmic reward? If so, then Amanda will be given a lot more joy and empowerment as she is a shining light in Lunchbox Theatre’s “After Schools Activities Program known as ASAP … a deliberate play on words because children need all that the performing arts can give them As Soon As Possible.

ASAP uplifts the children by teaching them lifetime skills and making them proud of their culture whilst growing through the opportunities afforded them to perform, through Amanda’s role as a Tshisa Talent Scout and Manager. However, this initiative is under threat through lack of funding. Would you like to be part of some empowering good Karma?  Pay it forward, like Amanda does, and click on the DONATE button on our website www.lunchbox.org.za as soon as possible and fund a kid to learn the performing arts.