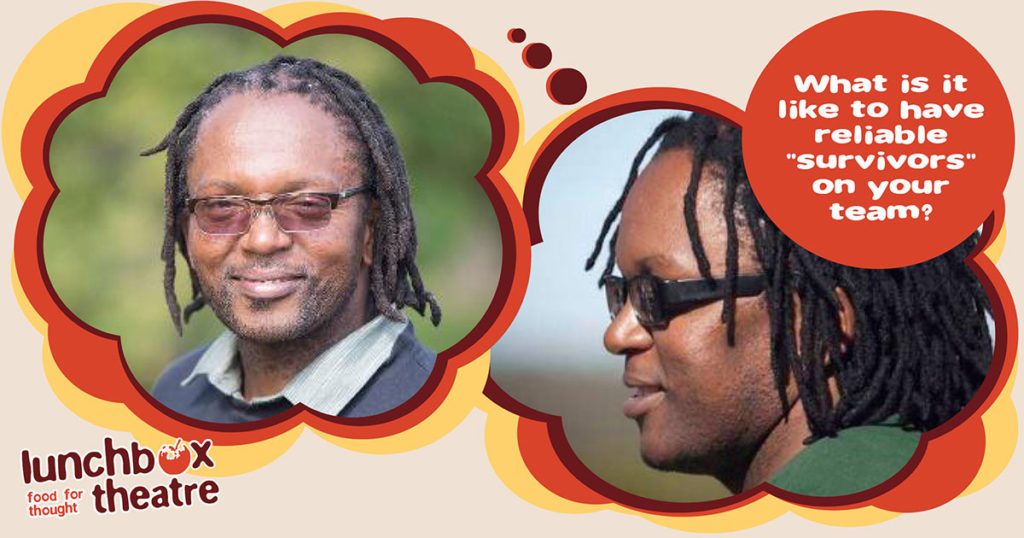 What does it take to be a good team member? Loyalty and commitment?  Belief in what you are doing?  The ability to be respected by others and the desire to uplift them, even at a cost to yourself?  A passion for going the extra mile? Someone who is easy to get on with and actively supports the growth of their fellow human beings? Here are some clues based on the Lunchbox  Theatre “Tribe”.

Lunchbox Theatre are fortunate to have an individual who has all the winning qualities of a Survivor. This is why founder, Stuart Palmer chose Mncedisi Ncedani as his ‘wingman’.

Mnce joined Lunchbox Theatre at the beginning of their journey, 9 years ago. He has earned a place in every show and that means that he has acted in over 600 shows and has helped to educate nearly 130 000 South African children!

This would not be possible if he did not have great power of concentration, the ability to learn fast and an excellent memory. Independence of thought holds the highest priority for him and he enjoys teaching children about gaining freedom through, ironically, playing by the rules. He is guided by the principal, “If everyone is doing what you are doing, would the world be better or worse?”

The new and unknown fascinates him which is why he would love to travel to the ends of the earth to impart the important messages conveyed our live theatre shows. Mnce has travelled with the Lunchbox troupe all over the Garden Route, Eastern Cape and the highlight was when they went to Zimbabwe for the premier of iLifa, The Inheritance at the HIFA Festival in Zimbabwe in May 2015

Besides acting, Mnce plays an active role in general management, play and song writing. However, one of his special skills is that he can identify weaknesses in others yet employ a benevolent attitude.  This makes him invaluable as an After School Activities Program (ASAP) teacher. The children who attend his ASAP classes benefit from his excellent communication skills and years of experience having graduated from New Africa Theatre in 1998 and the creation a number of shows that have featured at the Ikwezi Festival at The Baxter Theatre and at the Grahamstown National Arts Festival.  He has also been actively involved in taking his proteges to the Eden Drama Festival.

He is simply great at uncovering the strengths of those in his care and bring them into the light so that they can express their true potential. This has led to him becoming a main player in the Tshisa Talent, division of the organisation. Tshisa Talent uncovers, develops and promotes local talent which would have lain dormant within the communities. He now leads this performing arts division with innovation and a strict hand. For instance, his strong sense of responsibility allows him to teach children the importance of punctuality so that they can learn from an early age that ‘time’ can work for or against us.

Reacting quickly to arising problems or changing situations is second nature to him which is why he has been able to stay the distance as the organisation has grown over the years. Rather than being afraid of change, like many humans, he cherishes it. He is great to be around and attracts new friends like a magnet which makes it easy to be a good example.

As an independent thinker, Mnce is driven by his passion for changing behaviour for the better, one child at a time.  Being a sceptic with firm beliefs, he never puts his name to anything he does not believe in.   Through ASAP he is assisting youngsters to find their way in life, to express their individuality and stand a better chance by investing their time in developing their skills.

The What a Waste Show illustrates to youngster what would happen if everyone continued to litter and not manage their waste properly.  The Last Drop Show gives us a glimpse into a world where if everyone continued to waste this precious resource we may even, in time to come, start fighting over the rights to clean water. A Dog’s Life teaches children about a world where everyone cherishes their domestic animals while the Great Eden to Addo Adventure carries a similar message about how our actions affect our wildlife and biodiversity.  The Whale Show uses Wonder the Whale to show the children the importance of Marine Protected Areas and caring for our oceanic animals.  The Tree Show teaches us about the value of trees and nature in the cycle of life. Through the iLifa Show children are made aware that they have the power to overcome the cycle of child abuse present in our country.  And Thand Impilo can help to rescue them from the sad fate of contracting AIDs and HIV before it is too late to make a difference. Now those are the kind of survivors Lunchbox Theatre want to create.

Would you like to support Mnce and his fellow actors in their mission to educate South African youth about important social and environmental messages so that they grow up to be the best adults they can be?  You do not even need to leave home to get the message out.  Simply book the show conveying the message you need to help impart or go to https://lunchbox.org.za/share-your-lunchbox/.  Press the Donate button and bequeath a small monthly donation knowing that your gift will help to create strong South African survivors in the next generation.